The distinctive feature of the institutions is their Europe-oriented intercultural educational profile.

According to the Thuringian Ministry, the European Schools are guided by the following principles:

There are four recognised European schools in Jena:

We have compiled a short overview of the profiles and projects of the Jena educational institutions for you here.

The Friedrich Schiller Primary School Jena (FSG) was founded in 1984 and offers school education for up to 250 children. In 2002, 2005 and 2008, the educational institution was awarded the title of "European School". The profile of the primary school, the structure and organisation of the lessons as well as European-related projects justify this designation.

Within the framework of the Erasmus+ K1 and K2 programmes, the programme "School Partnerships Eastern, Central and Southern Europe and Baltic States" (PAD) and eTwinning, the FSG works together with schools from various European countries. Together, projects on different topics are designed and student exchanges as well as reciprocal teacher visits are realized.

The Schillerschule also participates in many activities with European ideas, including the project "Europa macht Schule", the annual "European Drawing Competition" and the Kangaroo Competition.

In addition, since 2016, the FSG has participated in the federal program "Menschen stärken Menschen" (People Strengthen People) in cooperation with the Federal Ministry for Family Affairs, Senior Citizens, Women and Youth (BMFSFJ) and the Thuringian Regional Association of School Support Associations.

The FSG offers early foreign language instruction starting in grade 1. Here, the students can already acquire their first English skills. The offer is extended from grade 3 with French lessons and a Spanish study group.

A partnership agreement has existed with the primary school in Aydat, France since 06.05.2008.

The pupils often read books from other countries in class and thus get to know, among other things, the life of children in the partner schools, other cities or communities and deal with the traditions of the respective country in class. Knowledge about Europe and the European Union is also renewed and extended with a Europe quiz. Every year, the pupils produce a European calendar for the year and create a European Christmas tree with the children from the partner schools through handicrafts.

During library visits with targeted book readings, they learn more about topics relevant to Europe, which are dealt with in projects. In the process, subjects from the areas of music, local history and science, art education, sport and the children's living environment are dealt with on a cross-national basis.

European children's festivals are also organised in cooperation with other schools, incorporating European fairy tales, children's songs and children's games. Thanks to the early musical education of the pupils, the programmes can be varied and full of sound. Children and parents of non-German origin are integrated in a targeted manner. The European idea is integrated in all subjects, during the Erasmus week in November and the project week in May, also through intensive media work.

The Erasmus+K2 project is currently running until 2020 with schools from Finland, Poland, France, Italy and Spain on the theme "Treasures of nature - small hands discover and protect our European future". The results of the projects are documented in photo books, in the school chronicle, in European Friendship corners of the school, on posters and in painting and handicrafts as well as in work materials and books.

The Karl-Volkmar-Stoy-Schule is a vocational school with a commercial profile. Business people are trained in the fields of wholesale and foreign trade, e-commerce, office management, retail, industry, automotive and finance. In addition, further school-leaving qualifications up to the general university entrance qualification can be obtained. Approximately 1,000 trainees and students are taught in the listed building, which is centrally located in Jena. It has been renovated and offers all the technical prerequisites for modern teaching.

The foreign language training takes place in a multimedia environment. Some learning fields and teaching modules are taught bilingually in order to prepare trainees and pupils for the international job market or for studying within the European Union. In a language gallery, pupils of non-German origin have been using the opportunity to present their mother tongue and home country for several years. This and numerous other projects prevent xenophobia and racism and sharpen the school's European profile.

As early as 2003, the Stoyschule was awarded the title of "European School" because the teaching staff constantly integrates European themes into everyday school life and facilitates intercultural encounters with a variety of activities. Since 2009, for example, a school partnership has been maintained with the Technical Secondary School for Commerce, Applied Art and Design in Plzeň. Every year, a group of German students visits the partner school and a group of Czech students completes internships in Jena companies. An exchange of retail trainees from Jena and Brest was also launched in 2017. Every two years, vocational school students have the opportunity to take part in this Franco-German exchange. A partnership with a school in Zielona Góra, Poland, is currently in preparation. Every year in autumn, Slovakian trainees take part in a work placement at the Stoyschule.

Another focus of the Stoyschule's activities is political education. In the context of democracy education, the teenagers and young adults often have the opportunity to meet with members of the Thuringian state parliament, the Bundestag and the European Parliament. For example, before elections, the school holds so-called candidate dating sessions, where young voters can ask questions of candidates from all parties in a short period of time. However, the pupils also have the opportunity to meet political leaders at extracurricular venues such as the European Parliament or the Bundestag.

Currently, the Stoyschule is applying for the title "Ambassador School of the European Parliament" in order to further expand its activities in this area. Every year, simulation games on European politics take place, focusing on current topics such as data protection or asylum policy. The school works closely with party foundations and associations. The Stoyschule also links the European idea with its educational goals in the areas of sport, culture and science.

At the State Vocational School Centre Jena - Göschwitz (SBSZ) approx. 1,500 students and trainees learn in 7 school types. After finishing school, they take a grammar school examination or receive a journeyman's certificate or a certificate after successful completion of the apprenticeship or vocational preparation.
The vocational school centre offers training in the following areas:

During the last 20 years the SBSZ Jena - Göschwitz acquired the titles:

and is still a training school of the Friedrich-Schiller-University Jena.

For 22 years, students and teachers of all school types have participated in national and international projects. This has resulted in a great deal of experience in the organisation and implementation of international projects. Some projects have been honoured or awarded prizes in national and European evaluations. The very good relations to European educational institutions enable the realisation of pilot projects, partnership projects and the cooperation (coordination) of several educational institutions with each other. The SBSZ Jena - Göschwitz takes a central, coordinating position in this process.

At the SBSZ Jena - Göschwitz there are numerous examples of sustainable use of project results of international cooperation. The use of the indicator list for peer review observations in everyday life, for improving the quality of reflection as a basis for changing one's own teaching and for finding a common basis for discussion about pedagogical action should be emphasised. Furthermore, the bilingual teaching modules should be emphasised. They have been the basis of bilingual teaching at the school centre for years. Mr. Patzer as head and contact person of the project has 22 years of experience in the organisation of European projects.

The State Vocational School for Health and Social Affairs Jena (SBBS) was opened in 1912 and affiliated with the Friedrich Schiller University Jena as a company vocational school in 1961. Since 1992, the city of Jena has been the sponsor of the SBBS, which provides training in a variety of health and social professions. The location in Jena-Lobeda is very advantageous due to its proximity to the university hospital.

Pupils and teachers can not only be trained ideally here, but also during stays abroad, which serve for intercultural communication between schools with similar vocational orientation. Living and learning in Europe, which is made possible for students and teachers, contributed to the awarding of the name "European School" in 2008, 2011 and 2014.

Internships of trainees in nursing, as educators or laboratory assistants in European countries such as the Czech Republic, Poland, Estonia or Ireland take place regularly and help the students to gain new experiences and valuable knowledge in an international context. These internships abroad are funded by the EU's Erasmus+ programme. The trainees' experiences on their travels can be easily traced thanks to public diary entries. 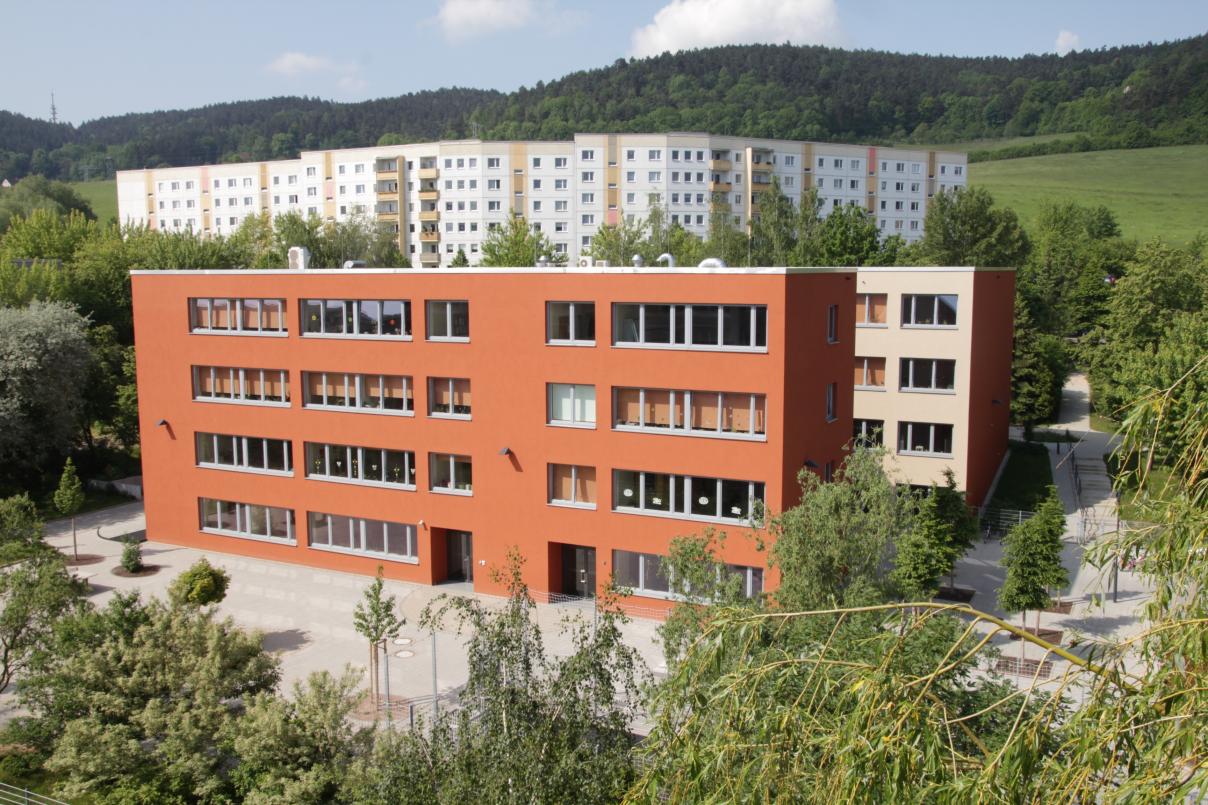 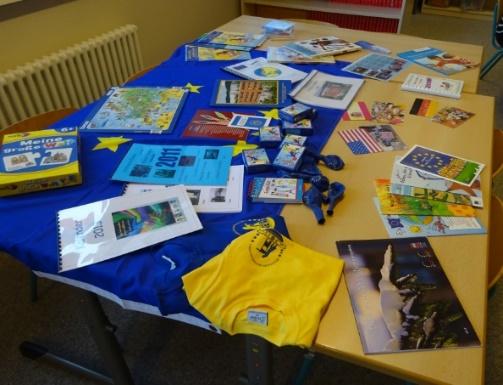 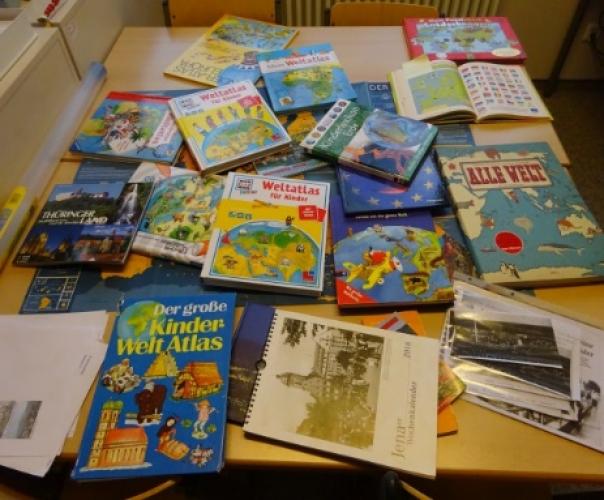 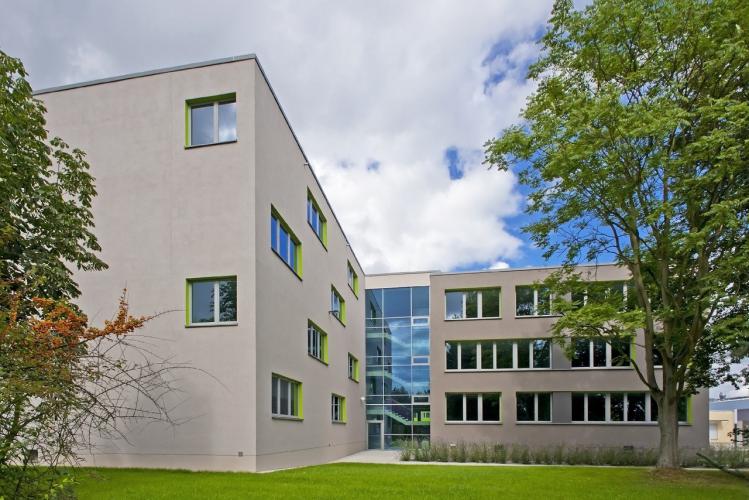 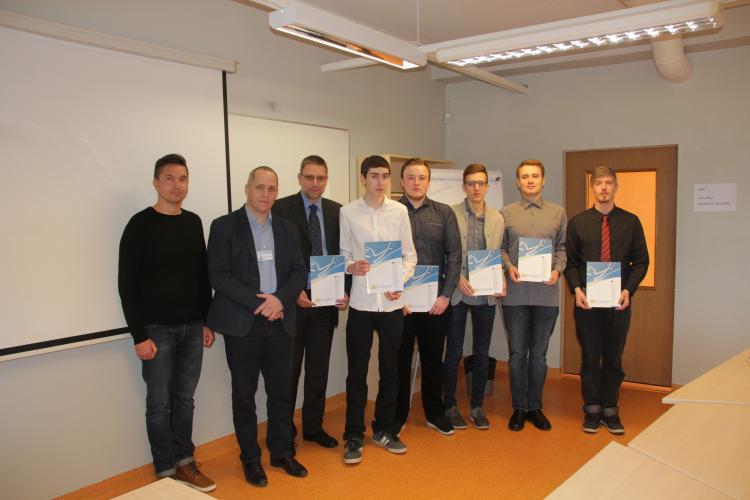 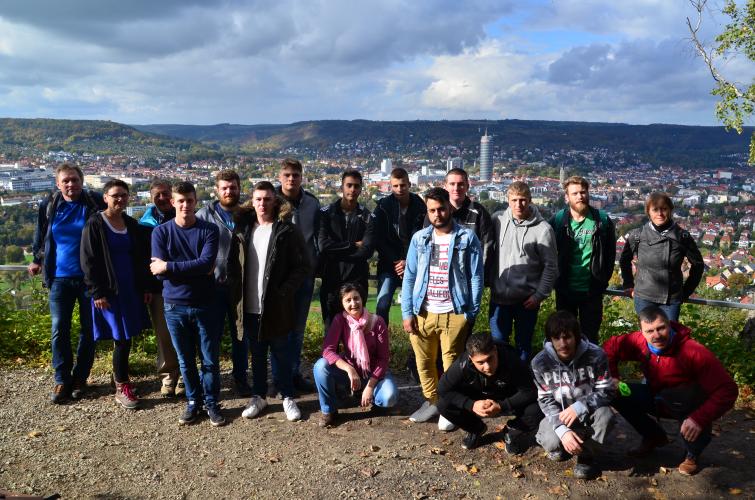 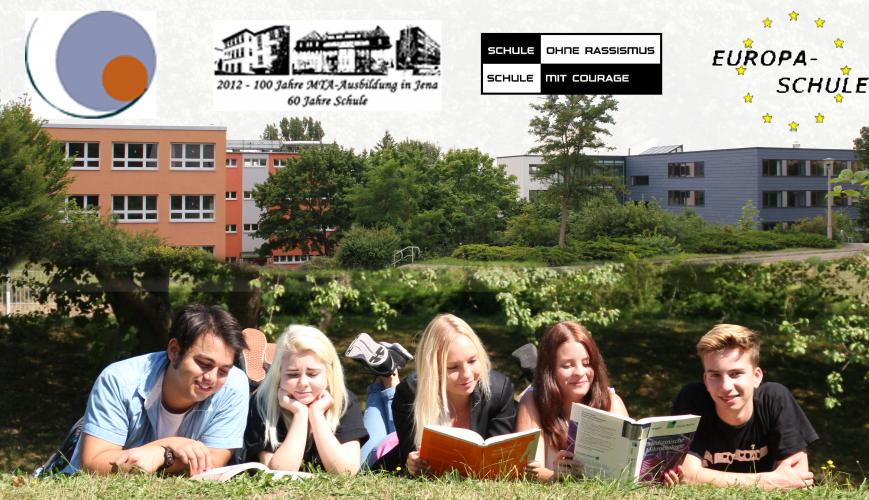 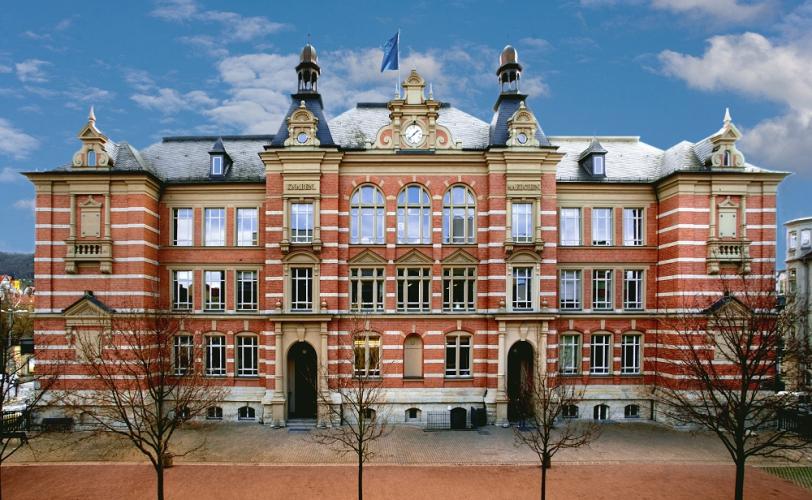 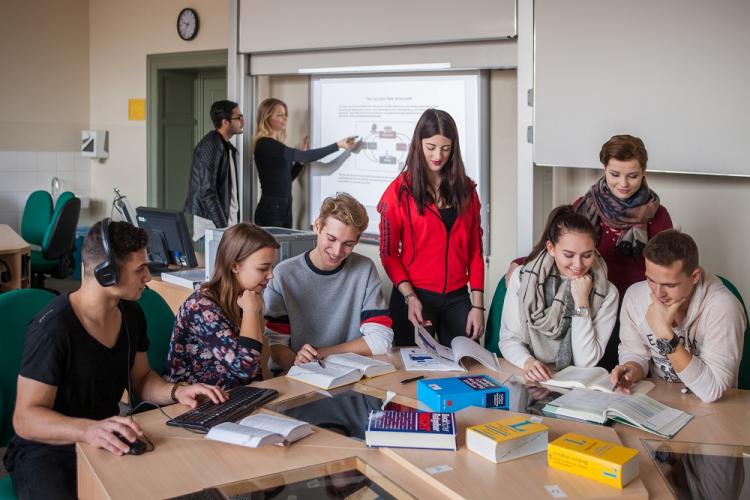 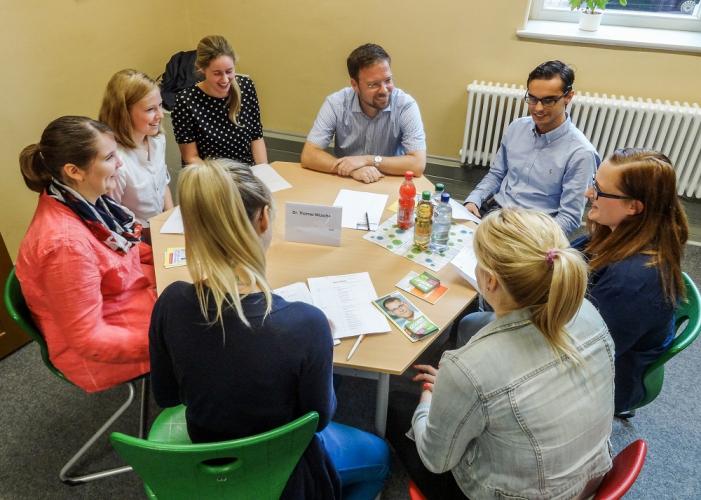